Sparring The Meeting Of Hands

Kumite is the third part of the Shotokan triumvirate of kihon, kata and kumite. Kumite is taught in ever complexity from beginner to blackbelt.

For the BEST Instructional Videos and Classes, Go To Our ONLINE DOJO!! OSS!!

Beginners first learn kumite through basic drills, of one, three or five attacks to the head (jodan) or body (chudan) with the defender stepping backwards whilst blocking and only countering on the last defence. These drills use basic (kihon) techniques and develop a sense of timing and distance in defence against a known attack.

At around green belt level karateka learn one-step sparring (ippon kumite). Though there is only one step involved, rather than three or five, this exercise is more advanced because it involves a greater variety of attacks and blocks usually the defenders own choice. It also requires the defender to execute a counter-attack faster than in the earlier types of sparring. Counter-attacks may be almost anything, including strikes, grapples, and take-down manoeuvres.

Free sparring (or free style) (jiyu kumite) is the last element of sparring learned. In this exercise, two training partners are free to use any karate technique or combination of attacks, and the defender at any given moment is free to avoid, block, counter, or attack with any karate technique. Training partners are encouraged to make controlled and focused contact with their opponent, but to withdraw their attack as soon as surface contact has been made. This allows attacking a full range of target areas (including punches and kicks to the face, head, throat, and body) with no padding or protective gloves, but maintains a degree of safety for the participants. Throwing one’s partner and performing takedowns are permitted in free sparring, but it is unusual for competition matches to involve extended grappling or ground-wrestling, as Shotokan karateka are encouraged to end an encounter with a single attack (ippon), avoiding extended periods of conflict, or unnecessary contact in situations where there may be more than one attacker. 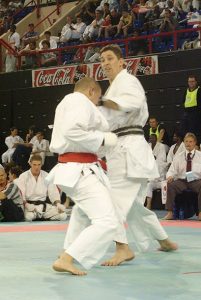 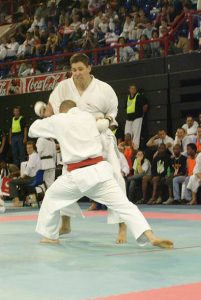 Kumite within the dojo often differs from competition kumite. In dojo kumite any and all techniques, within reason, are valid; punches, knife hand strikes, headbutt, elbow strikes, Knee, Kicks to the Thigh, Arm/Whrist locks, takedowns, kicks, etc. In competition certain regulations apply, certain techniques are valid, and certain target areas, such as the joints or throat, are forbidden. The purpose of competition is to score points through the application of kumite principles while creating an exciting and competitive atmosphere, whereas the purpose of training kumite in the dojo is to be prepared to kill or cripple (Self-Defense Purposes) an opponent in a realistic situation 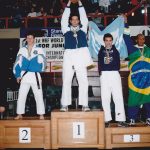 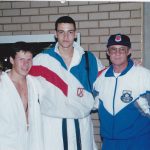 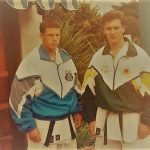